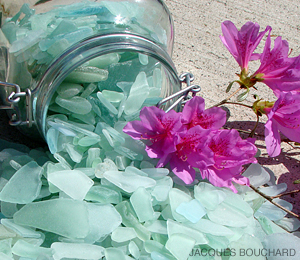 My fiancee' (Jessi) and I are an unlikely couple. She loves the bustle of the big city, and I'm more particular to the rustling sound of leaves in the wind. She loves a fancy restaurant, and I love a hole-in-the-wall diner. Needless to say, the early times in our relationship were an ongoing search to find common ground between us.

One attempt involved a $250 metal detector (we split the cost), and the two of us wandering aimlessly along a salty coastline. We were on our hands and knees in the mud with our shovels digging up pennies, soda cans, clumps of aluminum foil, toy trucks, and other oddities, all while staunchly ignoring the stares of nearby swimmers and sunbathers who were clearly having a much nicer time than we were.

Then it happened: Among the sand and seaweed, Jessi found a beautiful, bright blue piece of sea glass. Then I found one. Then we found a few more. By the time we'd reached the end of the beach, we'd forgotten our metal detector entirely, and were stuffing our pockets full. Our relationship was saved! (We're getting married in July.) 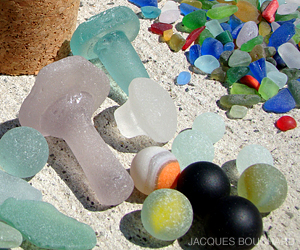 Some of the beautiful sea glass collected by Jacques and Jessi as they developed their hunting skills.

Today, we look back at the pieces we fawned over during our first days of hunting, and we chuckle fondly. If we found these pieces today, we'd throw them back! We've learned over the years that sea glass hunting is definitely something that you improve on with time.

"We've learned over the years that sea glass hunting is definitely something that you improve on with time."

If you're new to sea glassing, we'd like to pass along some of the good karma that the hobby has brought to us, and help you start finding the best pieces as soon as you can.

Plan the Best Times to Start Your Hunt

Choosing the best times to go sea glass hunting can triple your hoard for the day. Savvy sea glass hunters check tide charts online to find out when the waters are lowest, and plan accordingly. If the beach is popular for sea glass hunters, we recommend that you plan on being there about an hour before the lowest point of the tide. This gives you more time for fruitful hunting, and makes you the early bird in the search.

Jessi and I find nice pieces all year long, but we find that our best pieces turn up during the colder times in winter, when no one in their right mind would be out there. We also like to go "storm chasing", and arrive at a beach right after a hurricane or tropical storm has hit. With everything churned up, we find some wonderful things!

A smooth, well-groomed beach is not likely to be a fruitful one. This is because most of the rocks, litter, and debris have been "combed" out of the sand mechanically. During this process, the best of the sea glass will often be cleaned up with it. 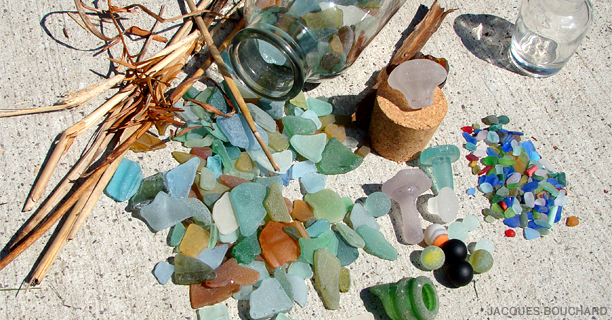 Instead, find a beach that has piles of stones, rocks, or even litter lying around. Or better yet, do a little research on the beaches in your area, and find one that's located near an off-shore dump from many decades ago. Those beaches will be veritable gold mines of old, beautiful sea glass. Locations of wharves are also great spots, as broken glass would often be thrown right off the boat and into the ocean as the ship was docked.

One of the nicest beaches we've ever hunted was completely covered in several feet of fist-sized rocks. Rummaging through those stones yielded many beautiful pieces of purple, white milk glass, pieces of pottery, and a gorgeous citron-colored bottle stopper. Amazing!

Search ALL of the Beach

There have been many times when, just as we were going to give up on a beach entirely, we turned a corner, and viola! We'd be picking up sea glass with every step. Explore a beach thoroughly and often – don't assume from one mediocre day that the beach is a dud. You may have just arrived a few moments after a family of diligent sea glass hunters swept through!

We find that small, hard-to-reach niches along the beach can be as valuable to search as a few hundred feet of accessible beach. Wear expendable clothing and crawl down rocks to small stretches of sand for some extra-special finds.

"We find that small, hard-to-reach niches along the beach can be as valuable to search as a few hundred feet of accessible beach."

It's also a great idea to check along the shore-facing side of rocks, along water spouts, and to follow up on all"hunches", no matter how unlikely they seem. One of the most fruitful spots Jessi and I have ever discovered is a stretch of abandoned asphalt, covered in sand, with sea grasses growing through. That's been the finding spot for several marbles, as well as some beautiful pieces of purple sea glass. 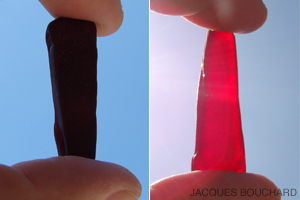 As the image demonstrates, when backlit by the sun, a dark glass shard can reveal a very special sea glass find.

One last thought: focusing entirely along the shoreline could cause you to miss out on some beautiful finds. If you're in the mood to go on a hunt, and the tide is high, don't be afraid to check out the shifting sands inland once in a while. During one such search in unlikely territory, Jessi found two beautiful black sea glass marbles! (See photo in sidebar)

Look Closely and Take Your Time

I can't tell you how many times, early on, I would have walked right by a marble, a piece of red sea glass, or some other rare treasure only to have someone walking behind me find it. This happened as recently as my last excursion – we stopped to talk to a sea glasser along the way, and he found a beautiful blue glass rod in the sand a few feet behind me!

Take your time, and move slowly – even if there's a lot of beach to cover. Let the sea glass "jump out" at you as you stare at the sand, and try to keep the sun at your back. In particular, keep on the lookout for black sea glass, as pieces of this rare color are often mistaken for rocks. If you've begun to pass up pieces (brown, green, and clear, for example), make sure they're really the color you think they are.

A classic example – I almost passed up on a beautiful red shard because I thought it was brown. But when you hold it up to the light, its beauty shines out (see photo at right).

Jessi and I have made it our goal to find every color shown in our Pure Sea Glass Identification Card Deck[1]. For the longest time, we had every color but yellow, pink, and orange. And what was frustrating for us was that some pieces that are considered very rare, such as red pieces, bottle stoppers, or marbles, were turning up fairly easily. And easier pieces, such as white milk glass or pottery pieces, were nearly impossible to find.