Homepage > Chesapeake Bay's sea glass a treasure to many

Chesapeake Bay's sea glass a treasure to many

Like a stalking predator hearing movement in the bushes, Linda Starling froze, her senses perched on a hair trigger. At first, the only obvious sound along this sandy stretch of shoreline was the dull rumble of jets idling on the runway across the Chesapeake Bay at Naval Air Station Patuxent River.

But there it was again, unmistakable this time: a high-pitched tinkling emanating from the soft boundary between land and water.

“Did you hear that?” Starling asked, with growing excitement. “You can hear the glass in the water.”

Sea glass, as it’s called, whether it’s found in an ocean, bay or river, begins as litter in the water. Then wind, waves and sand intervene, shaping and sculpting, polishing and smoothing. Years, perhaps even decades, pass. On the far side of its journey, the glass morphs into something else, something more than an ordinary shard of silicate. Something collectible.

Wherever in the world shells, driftwood or other debris wash up along the edge of the water, it’s a decent bet that sea glass is sprinkled in as well.

With more than 11,500 miles of shoreline on the Bay and its tidal tributaries — more than the entire U.S. West Coast — the Bay is like a huge catcher’s mitt for floating detritus like sea glass. And it has a ready supply from a range of sources: junk jettisoned from cargo ships, cast-off glassware from long-shuttered waterfront factories and underwater caches of trash from when the Bay moonlighted as a de facto landfill. 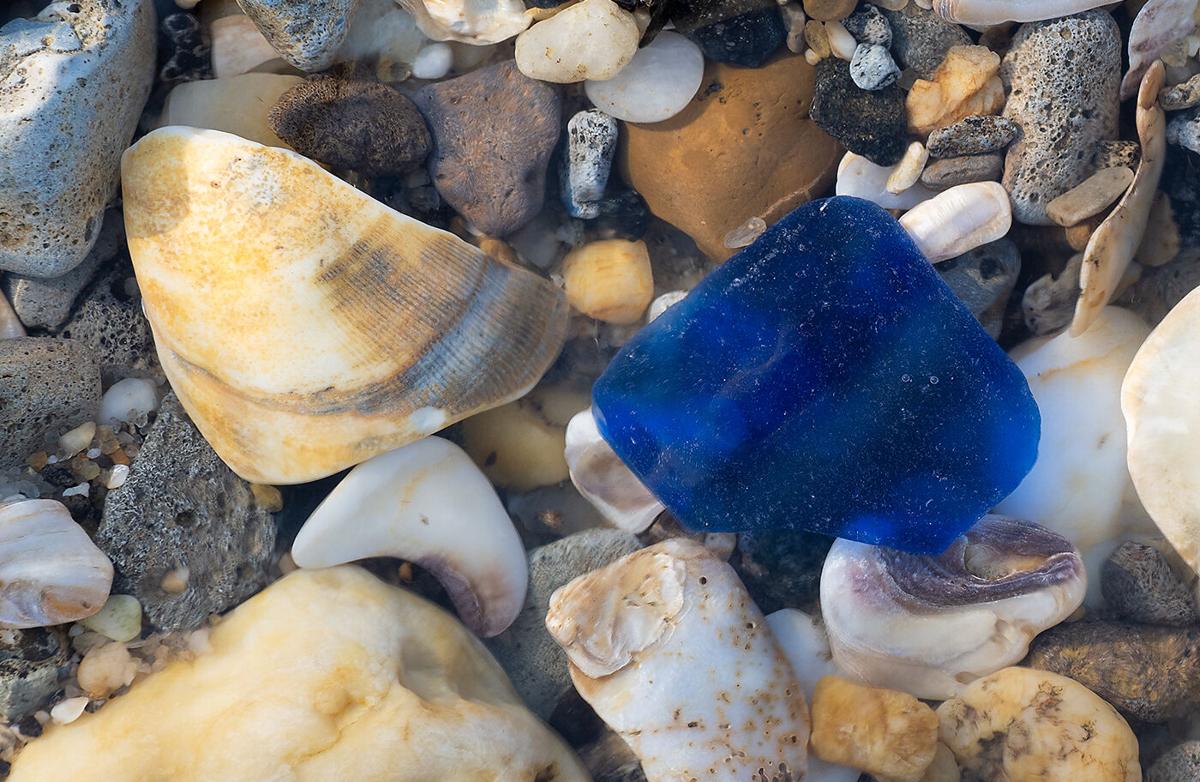 In the Bay and its rivers, as opposed to the ocean, glass generally takes longer to transform into sea glass (decades as opposed to years) because of the relatively gentle waves and lower salt content, avid collectors say. But once the glass is finished “cooking,” it emerges with a frosted patina, rounded edges and vivid coloring — in short, all the desired hallmarks.

Sea glass hunting has quietly forged its own niche among Chesapeake pastimes, supporting a cottage industry of boutiques, where colorful glass bits of all sizes can be found adorning necklaces, earrings, bracelets, suncatchers, wind chimes, holiday ornaments and more. It has also given rise to festivals devoted mostly to sea glass art and products. The Eastern Shore Sea Glass and Coastal Arts Festival in St. Michaels, MD, for instance, is believed to be the largest festival of its kind on the East Coast.

When it was launched nine years ago, the festival had four vendors and a proportional number of sea glass seekers. By 2019, the festival had mushroomed to 90 vendors attracting about 14,000 people, expanding the population of St. Michaels by 12-fold over the two-day period.

The COVID-19 pandemic forced the cancellation of 2020’s festivities and postponed this year’s April showcase. Organizers are tentatively looking at November 2021, if the virus can be brought to heel by then.

In another indication of the hobby’s ascendancy around the Chesapeake, enthusiasts have raised more than $25,000 via a GoFundMe site to establish a brick-and-mortar museum on Maryland’s Eastern Shore to house “beachcombed” items. 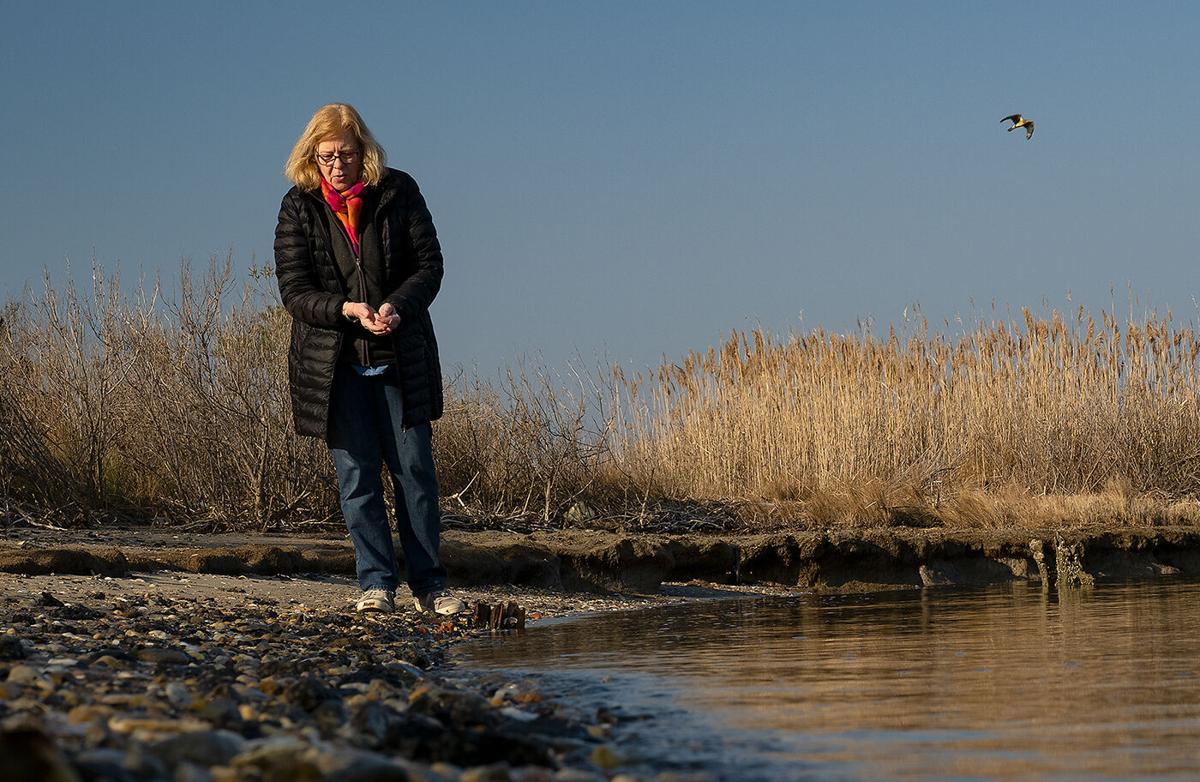 And then there are the countless hobbyists, like Starling, who ply their upcycled wares online and on the region’s arts and crafts fair circuit. Her work typically pairs sea glass with sterling silver settings, hoops and chains, displaying both rustic and refined characteristics.

A part-time office worker at the Horn Point Lab in Cambridge, MD, Starling came by her interest in sea glass casually. In 2002, she bought a second home on Hooper’s Island, a fishing village on a fragmented island of the same name west of Cambridge, and began talking walks along the shoreline. Gathering sea glass gave meaning to her outdoors time and eventually a gainful purpose.

Although she has since moved inland, Starling returns regularly to Hooper’s Island to add to her collection, including a chilly afternoon last December. Her hunting ground that day was a sliver of beach at the southern tip of Upper Hooper’s near the causeway and high-arched bridge that lead to Middle Hooper’s.

Landward, phragmites gripped the sand, forming a tenuous escarpment. Waves lapped lazily at the shore. Starling had timed her visit around low tide, when the receding water provides more bottom for buck. As the tide ebbed, it revealed a mosaic of shells, oyster halves and chunks of red brick. The latter was a promising sign, she said, that this had been a dump site in the past and might contain a healthier supply of sea glass.

But, alas, that day’s hunt was a bust. There were plenty of specimens, but virtually all were too “young,” not nearly worn enough for her specifications. “Do you see all the rough edges and sparkly spots?” she asked, pinching the former bottom of a brown bottle between her fingers. “This [should] go back for more polishing. … You don’t want any rough edges or chips for jewelry-quality.”

Sea glass hunters are usually tight-lipped about their favorite spots, fearing any advertisement will bring more foot traffic and deplete the supply. Word apparently had gotten out about this one. When Starling arrived, there was already another stooped figure on the shore. 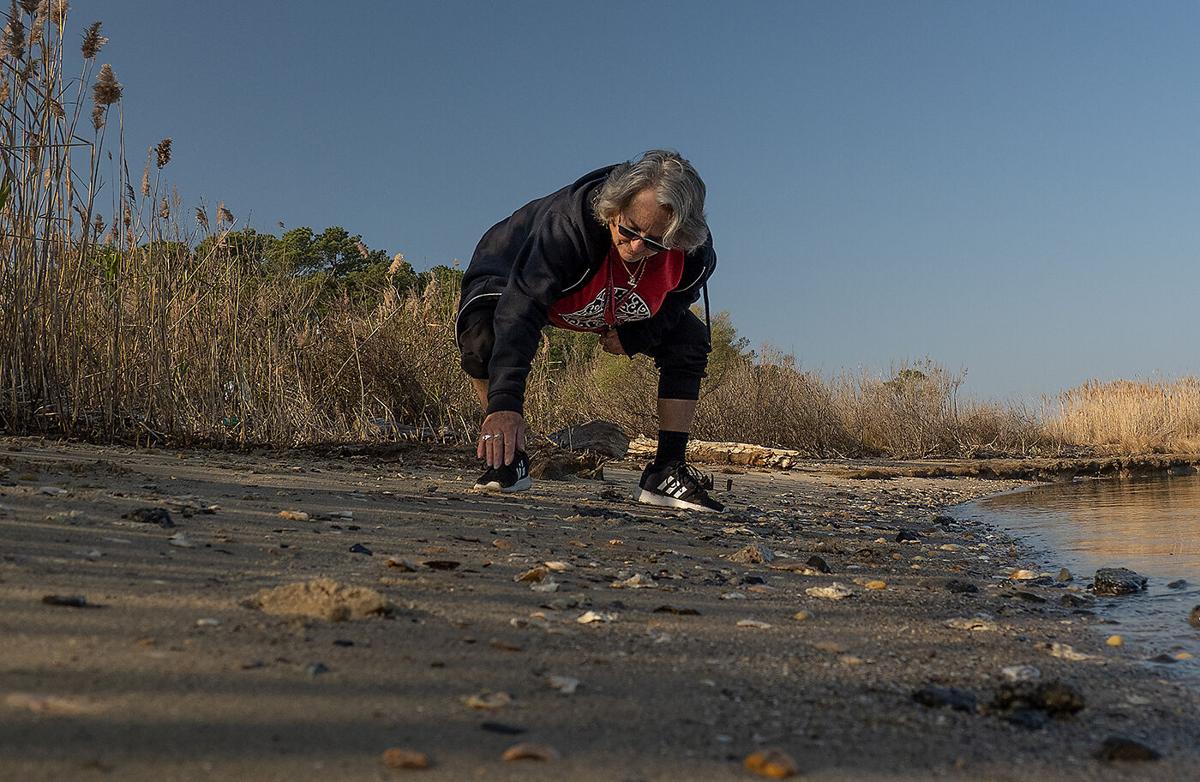 That was Pam Grosz, who had made the hour-plus drive from Salisbury. Like Starling, she planned her day around the rhythms of the tide. She started collecting sea glass around the time the pandemic-induced lockdowns began in March 2020, she said.

“I needed something to get me out,” Grosz said.

Sea glass may be the embodiment of the adage that one person’s trash is another’s treasure. Kim Hannon, president of the North American Sea Glass Association and the lead organizer of the St. Michael’s festival, admits as much.

“There is a fine line,” she said. “Some people would consider it trash even if it was completely finished and smooth.” But, she added, “I think more people are seeing the value in it.”

For evidence, she points to “fakers,” people and companies that run new glass through rock tumblers or treat it with acids to simulate gradual weathering. One of the driving forces behind the creation of the Sea Glass Association about a decade ago was for devotees of authentic sea glass to build an organizational firewall against artificial competition, Hannon said.

Spotting the difference can be difficult without a magnifying glass and a trained eye.

In authentic sea glass, the most desirable types are orange, yellow and pink because of the dearth of glassware bearing those hues. Green, brown and milky white, meanwhile, are a dime a dozen. And there is no ideal size; collectible pieces may range in size from mere flecks of glass to fully intact bottles.

Some of the best places to find sea glass in the Chesapeake, enthusiast say, are also among its most picturesque — the unhurried beaches and coastal parks. Examples include the beaches adjacent to the working waterfronts of Deal Island and Crisfield in Somerset County, MD; Claiborne in Talbot County, MD, where the Chesapeake ferry used to land; and Anne Arundel County’s Fort Smallwood Park, with its crescent-shaped shoreline at the mouth of the Patapsco River.

Others prefer to hunt by water, trading mud boots for kayaks, to search the shallows or come ashore in places hard to access by land. Winter is among the best seasons to look for sea glass, Hannon said. There is a greater frequency of storms that churn up the water and deposit glass on the shore. She and other hunters often visit their favorite places the minute a storm passes, hoping to find the good stuff before anyone else gets there.

The Chesapeake has a national reputation among collectors as a must-visit destination for cobalt blue glass, one of the most prized colors. The shuttered Bromo-Seltzer plant in Baltimore is believed to be the primary source.

The hobby, though, is under threat around the Chesapeake and worldwide, said Hannon, who operates shops heavy in sea glass merchandise in St. Michaels and in Kent Narrows, both called Ophiuroidea, a taxonomic family closely related to that of the starfish.

The stockpile of sea glass lurking in the shallows is dwindling. Manufacturers have transitioned from glass to plastic as their packaging material of choice. And what glass remains in the trash stream is less likely to end up in the water because of recycling, dumping bans and anti-littering campaigns.

“If there’s a good spot that you know of that not a lot of people can access,” she said, “that would be a place where you can still find a lot.”

Jeremy Cox is a Bay Journal staff writer based in Maryland. You can reach him at jcox@bayjournal.com.