Bermuda is for Sea Glass Lovers 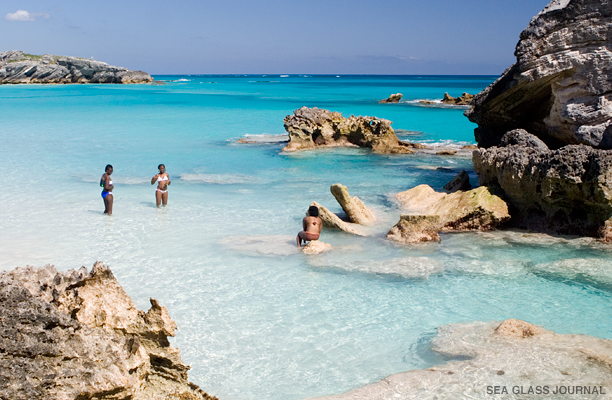 Horseshoe Bay, along with many other beaches on Bermuda, are some of the most beautiful beaches in the world. As sea glass collectors, we may be focused on hunting for those ocean glass gems, but don't forget to enjoy some of the fantabulous vistas that Bermuda has to offer.

Bermuda is for Sea Glass Lovers 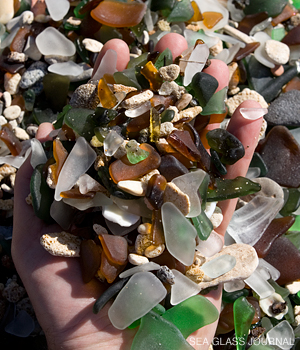 At the Dockyard Beach you can literally scoop up handfuls of sea glass.

Why so much sea glass?

Situated in the northern Atlantic just 770 miles from Boston and New York, Bermuda offers some 70 miles of coastline and almost that many miles of soft sand beaches. But a combination of jagged reefs encircling its shores, shallow coastal waters and a hurricane-prone location from the Gulf Stream make Bermuda a "perfect storm" for tricky sailing over the last 500 years. 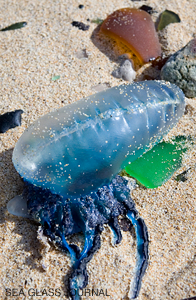 Depending on the time of year, you will have to keep a vigilant watch out for Portuguese Man-of-War. This fella was protecting its sea glass hoard at Alexandra Battery Beach in early spring. 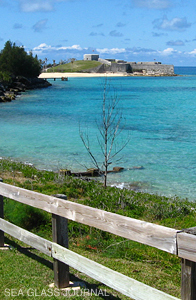 A view of St. Catherine's Fort going southeast on Barry Road. The beach by this fort offered up lots of chunky seafoam sea glass, probably originating from many soda bottles.

That has led to hundreds of shipwrecks, with schooners stocked with medicine bottles, whiskey cases, decorative glass and glass goblets. Today, you can find remnants of those and more in the sea glass that shows up on Bermuda's shores.

In addition, because Bermuda has been populated as a key British Naval port since the 1600s, there is a long history of people actively working and living here. Fortunately for sea glass collectors, that also means a long history of throwing out glass on what is admittedly a very small island. Today, St. George on Bermuda's east coast is considered "the oldest English town in the New World" and recognized as a UNESCO World Heritage Site.

...St. George on Bermuda's east coast is considered "the oldest English town in the New World"...

A third reason why sea glass may be so abundant on Bermudean beaches is rum and the bottles in which it's packed. Like its Carribean neighbors, Bermuda has a long history of rum, with Goslings Bermuda Rum made since 1850 and now the island's #1 export.

What you can find

Unlike our previous sea glass hunting trips to Puerto Rico, Fort Bragg, California and Price Edward Island, Canada, we didn't find large numbers of beautiful pastels or cobalt blues in Bermuda. But we did find a multitude of especially large pieces in lovely seafoams, greens, and whites — and all were beautifully shaped and nicely well-worn.

Fortunately, with just 21 square miles, Bermuda is easily accessible for sea glass collectors. It offers a phenomenal public transportation system so it's easy to get around the island. Many people rent scooters, which are very popular but can be risky, so during our trip we relied on the public bus or ferry to get from centrally located Hamilton Sound, where we stayed, to St. George on the western coast and to the Dockyard on the far northeastern tip. 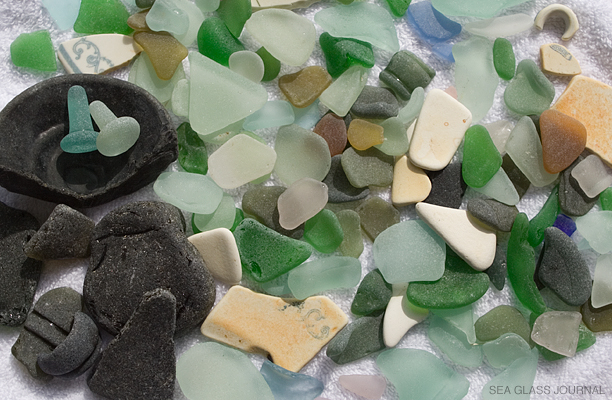 This bounty was collected after spending a couple of hours at Alexandra Battery Beach. Incredibly, two sea glass stoppers were found within 5 minutes of each other. Not so unexpected, due to Bermuda's rich maritime history, lots of old, black sea glass was found as well.