People are getting very serious about sea glass.

While there is less of it on beaches than ever before—because of recycling, sand replenishment, and rising water levels—interest in collecting “mermaid’s tears” has only grown in intensity. To get to the best sites, extreme glassers will “hike for two hours, windsurf, jet-ski long distances, even rappel down cliffs, whatever it takes,” says “Godfather of Sea Glass” Richard LaMotte, whose self-published Pure Sea Glass has sold 85,000 copies. Individual pieces sell for up to $300, jewelry can run into the thousands, and sea glass’s comforting hues are increasingly popular for home decorating.

There’s even a North American Sea Glass Association (NASGA) whose two-day fall confab draws more than 5000, highlighted by the Shard of the Year contest with its $1000 prize. (There are complex rules about colors and how weathered, or “cooked,” the pieces have to be; and extra points for lettering or unusual shapes that can denote age going back decades or even centuries.) 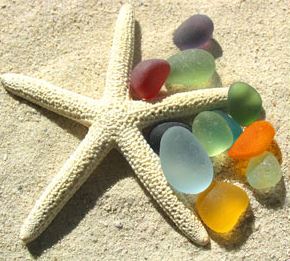 In my family, it’s not uncommon to find a gaggle of us glassheads combing Jersey Shore beaches, heads down. Every few minutes someone will yell “Green!” or “Brown!” or “Clear!”—or if they’re lucky, “Blue!” Our holy grails, though, are reds. My dad, our shard patriarch, searched his whole life without finding one. We take our glass pretty personally. Most people do. Some shards seem to have mystical powers, as if placed in your path by long-lost relatives or friends.

If the glassing is bad or the tide is high (low tide reveals more glass), we dream of the so-called Glass Beaches at Fort Bragg in Northern California and in Kauai, Hawaii, as well as locations along ocean and lake shores where bottles and tableware were once dumped. (It takes 30 years of wave action and high water pH to pit surfaces and smooth edges.) 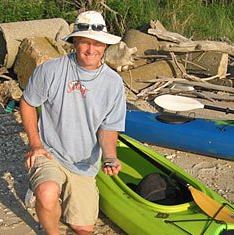 This year, I decided to ask LaMotte (pictured left) — whose day job is marketing water-testing equipment — if he would take me to one of his secret spots. On a hot summer afternoon, the 50-year-old shardist and I meet at an undisclosed Chesapeake Bay location and kayak out to the beaches where he and his wife, Nancy, were first turned on to sea glass.

We come ashore to what my family would call a “target-rich environment.” Most of the times I bend over, I pick up two or three pieces—each one fully cooked. LaMotte seems disappointed by the take (and the beach erosion). But with 30,000 pieces at home, he is a generous glassing companion, and unconcerned when I pounce on a perfect purple bottle bottom. He appreciates shards large and small for their colors and bottle backstories.

Collectors love to debate whether their pieces washed in from deeper waters or sat under their beaches for years and were just revealed. LaMotte doesn’t have easy answers. “Probably both,” he says with a crinkle-eyed shrug. (He does, however, know that the fantasy of sinking a bag of newly broken blue bottles offshore and retrieving fully cooked specimens a few years later doesn’t work. Sorry.)

After a couple of hours, I have over 300 pieces. I’m not sure any are Shard of the Year contenders, but glass season is just getting into full swing: Late summer and fall storms churn up the most treasures. And the two-day NASGA convention—this year in Hyannis, Mass.—starts on Oct. 9. So we all still have plenty of time to search.

Stephen Fried is an adjunct professor at Columbia University Graduate School of Journalism. His new book is ” Appetite for America: How Visionary Businessman Fred Harvey Built a Railroad Hospitality Empire That Civilized the Wild West.“ 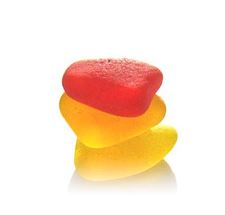 Greens and browns are common.

Blues are harder to find — but not impossible: Cobalt or cornflower blues crop up once in every 250–500 pieces.

Aqua and seafoam are rarer, but those sea-glass colors are now common in home decorating.

Most purples, LaMotte says, were originally clear; the manganese in them slowly oxidized into the rarer hue.

Webnode, an innovative sitebuilder
Have a captivating website for free!
Get started