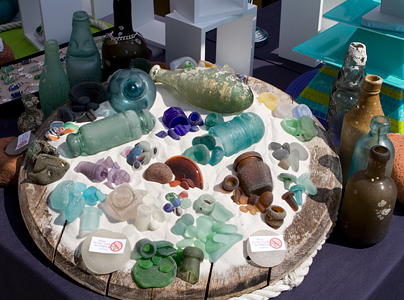 NASGA: The North American Sea Glass Association has announced that the 2013 Sea Glass Festival will be held again in Virginia Beach, at the Virginia Beach Convention Center, over Columbus Day weekend, October 12 & 13, 2013.

Journal: NASGA has held the national festival in various locations of the US annually with the idea of promoting the joy of sea glass to as many people as possible. They have been very successful in this goal as the popularity of sea glass collecting has grown exponentially. As a result, more regional sea glass festivals are being held each year in locations all over North America. With the regional shows effectively spreading the word NASGA should now focus on a single location to host the national event.

Taking this course of action will provide NASGA more continuity in which to develop and grow the festival without being encumbered by finding a new location and date each year that won't encroach on other regional festivals. Among the benefits of this are having more time to effectively advertise the affair as well as giving exhibitors and attendees more time to plan for it.

After establishing an east coast festival they might then decide to try alternating yearly between the east and west coast.

Either way it should be a win-win for sea glass enthusiasts.